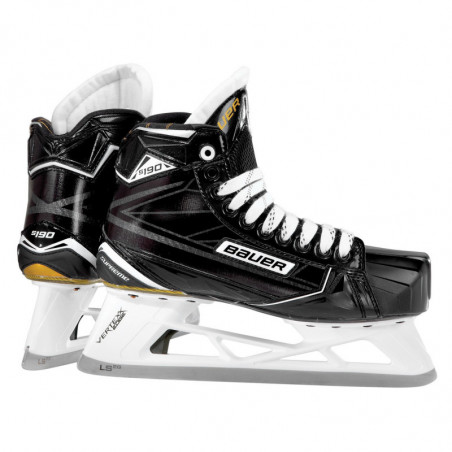 With one of the most anticipated new lines in goaltending in the recent years, Bauer has brought you one of the most engineered, designed, and technologically advanced line of gear. The Supreme S190 is packed with new features which strive to change the face of goaltending.

At first view, these don’t look like traditional goalie skates and that is exactly what Bauer is going for! The S190 skate is designed to increase the attack angle of goalies moving while in the butterfly position as well as recoveries and movements around the crease. The outer cowling has been removed and a “traditional” looking player holder has been added to the boot. The protection that the old cowling used to offer is still added into the outside panels of the skate, as well as keeping the protection at the toe. The S190 is a bit softer by having some layers of the Curv Composite removed making the suppler. By removing the toe cap, the goalie now has better contact with the front of their pad as well as removing drag on the ice. Again, the protection remains as the S190 skate features the same thickness at the toe that the older cowlings provided, just in a way to improve the performance of goalies.

Included in the New Vertexx Edge Holder is the 3mm LS2G steel specifically designed for the anatomical position the goalie will be in. This steel is removed via the Edge Trigger system found on the player skates and gives goalie the opportunity to change their steel on the fly.

With the asymmetrical design of the boot, the inside edge sits taller on the ankle to provide more stiffness and protection when in specific movements. The outside edge of the boot is lower to provide relief on the ankle for less fatigue and a deeper stance. Also, the comfort edge padding adds to the softness the skate provides. The tongue of the skate reflects the same changes and is proportional to the foot. Coupled with the Hydra Max2 liner, the sweat buildup is reduced and keeps the foot locked in place.

Check availability for this product